Names for the Baby in the Manger – Sermon Application #1 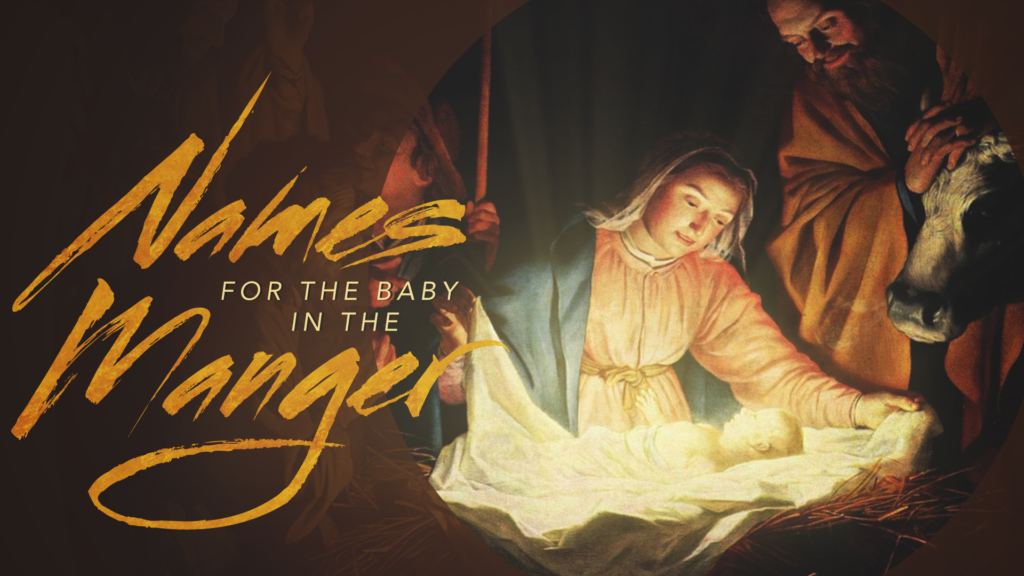 When king Ahaz refused to ask for a sign from God which would indicate God’s coming deliverance from the Assyrians, Isaiah responded by saying, “Therefore the Lord himself shall give you a sign; Behold, a virgin shall conceive, and bear a son, and shall call his name Immanuel.” (Isaiah 7:14).  The name “Immanuel” means “God with us.”  It is a divine name which first and foremost signifies the incarnation─ the term describing how God came in the flesh.

Application to the doctrine of the incarnation:

The incarnation is a remarkable miracle which defies human reasoning and exalts the infinite wisdom of God.  By uniting in one Person the human nature and the divine nature, God made Jesus a Mediator─ an intervening Reconciler─ one who represents God to men and men to God.  This union of two natures in the Person of Jesus is referred to as the hypostatic union.  As Pastor Vradenburgh said, “Jesus was God with skin on.”  Church history is filled with heresies that went astray in various ways because of philosophical reasoning.  The Ebionites denied the deity of Christ as if it were irreconcilable with monotheism.  Many Gnostics rejected the humanity of Christ as if a real physical body was inherently corrupted and unfit for God to indwell.  The Apollinarians so confused themselves with the philosophical difficulties of this union that they denied that Christ had a real human mind.  The Nestorians denied the union itself, making Christ into a twofold personality.  The Eutychians emphasized the divine nature to the extent of supposing that Jesus’ physical body was divine─ which is to say that Jesus had only one nature.  Although we cannot understand the incarnation exhaustively, we affirm that there are two natures─ one fully divine and one human─ in the Person of Jesus Christ.  He is theanthropic—both human and divine.  Jesus’ two natures exist in perfect union without mixture, without change, without division, and without separation.

Application to the doctrine of the virgin birth:

The virgin birth of Jesus is essential to the Gospel─ which is why the devil attacks this doctrine as if it were an absurdity.  Why is the virgin birth essential?  In order to save us from our sins, Jesus had to die in our place; in order to die in our place, He had to “be made like unto his brethren” (Heb. 2:17) ─ excepting the sin nature.  He not only had to come in a human body, but He had to have a sinless human body; or else He could not die as an acceptable substitute.  How could one justly pay another’s debt when they have their own debt to pay?  Keeping in mind that the sin nature is inherited from Adam (Rom. 5:19), we can see why the virgin birth was essential (Matt. 1:18-25; Luke 2:4-7; Gen. 3:15; Isa. 7:14, 9:6).

When we think of the name “Immanuel,” we should not only think of the incarnation.  We should also consider how God is still with us by the indwelling of His Holy Spirit!  The Bible says, “if any man have not the Spirit of Christ, he is none of his.” (Rom. 8:9).  In his first letter to Corinth, Paul says, “Know ye not that ye are the temple of God, and that the Spirit of God dwelleth in you?” (1 Cor. 3:16; cf. 6:19).  While every born-again Christian has the permanent indwelling of the Spirit, we can “quench” Him by our sin and stubbornness (1 Thess. 5:19).  When the Holy Spirit is speaking by the word of God with power, He is often discernable by a fiery conviction that burns within the heart (Jer. 20:9, 23:29; Ezek. 3:14; Luke 24:32; see also “[hot] in spirit” in Rom. 12:11; cf. Rev. 3:16).  Just as Jesus “came unto his own, and his own received him not” (Jhn. 1:11), so the Spirit of Christ may come to us with the fire of conviction and be turned away as we harden our hearts to His sanctifying operations (Jhn. 16:8).  The Spirit of God is prompting and enabling us to put sin to death and to walk in love (Rom. 8:13), but we quench Him─ stifle His loving work─ when we resist or ignore His work of conviction.  We must be aware of “God with us” in terms of His comforting presence, but we must also be sensitive to His convicting reproof.