A Behind the Scenes Look at “The Gardener” from Easter Sunday 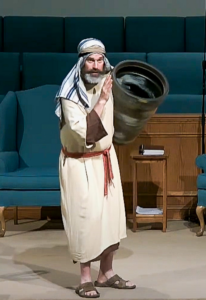 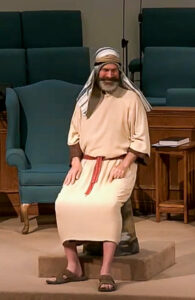 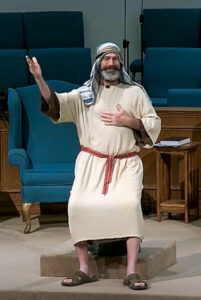 The Lord began moving Debi and me (and Evan) to Friendship almost ten years ago. It was an unexpected process but has been a great blessing to our family. In our previous ministry, we, and I say “we” because the level of family involvement in this is complete, were involved in countless dramas in church and our Christian day school. Both of our sons loved acting in these. Many were musical productions, and Debi was always a key figure, no pun intended, as accompanist extraordinaire. I directed and sometimes acted, which all seemed very natural. Debi had been in numerous plays in high school. My mom was a director, and all my siblings and I acted in school and church productions growing up. My mom even wrote several plays for special church and family events. Debi and I met and began dating through our involvement in “The Music Man” production at Bob Jones University in 1984.

Over the years, I have also dabbled in writing plays and musicals, which began at our first ministry in a small church in Ohio, where I wrote a couple of cantatas and continued in Rocky Mount at Falls Road Baptist Church and School. It’s a scary and arduous but rewarding process to pen something for public consumption. However, the opportunity to stage something one has actually created is very freeing for a director (and actor).

Shortly after arriving in Raleigh in January 2013, planning began for Easter, my first big event at Friendship. Well, actually, the first big event was Missions Conference, but holidays take special precedence for music ministers. Pastor Vradenburgh wanted to have a simple sunrise service. I LOVE sunrise services, much more than others do, I fear. So, I put forth the idea that I could do a dramatic monologue. The motivation behind the suggestion was that I know folks have a tough time even making it to a 7 am service, let alone being asked to serve at one. I’ve always taken a similar approach to the Christmas candlelight service, another favorite of mine. Let me or my family be the primary laborers – you just come and enjoy and be blessed! That is the desire, and it is definitely a labor of love.

Pastor reacted enthusiastically, and so now … I was stuck. That has long been a motivational strategy of mine. If I have to do it, it will get done. If not, maybe not. But I had to do it, especially after we began promoting the event!

The germ of an idea is a necessary first step to writing. The germ, in this instance, took shape as follows. Narrations can be rather dull and dry. Biblical characters can be somewhat restricting. The thought might be described as, “Would that person, an actual person, really do or say the thing you’re having him do or say?”. That is a legitimate concern, in my opinion. But how about a Biblical figure who is barely mentioned, not named, or may or may not have existed? Hmmm, that is pretty fertile ground for the imagination. How about telling the crucifixion and resurrection story from the point of view entirely bound to the facts of the event but not bound to any actual real-life point of view? Hence was born “The Gardener.”

Inspiration from an Easter Sermon in College

Back a couple of years ago, in my college days (ha!), I heard the magnificent wordsmith, Dr. Bob Jones, Jr., preach a sermon at Easter. He mentioned the line from the gospels, “Mary, supposing him to be the gardener …” I remember and often imitate (a diploma requirement in those days!) what he said in his aristocratic southern drawl, Mary, supposing him to be the gardener … BUT, He wasn’t the gardener. He was the risen Lord of glory! I have never forgotten the line and, certainly, now I never will, as it was the springboard for the birth of this fictional/non-fictional Biblical character, “The Gardener” of the garden tomb.

Well, that was a start, but not a finish. As the ideas kicked around in my mind, I worked out the basic material to be included and developed the character, like his signature “Yes? You know, yes!” line, which I used as a way to maintain the accent (maybe I shouldn’t give away all these secrets!). However, I did not complete the “script” until almost Easter day. I decided to do a rather “avant-garde” staging, using modern-day landscaper attire for this ancient character. The script remained in a very unfinished form, only for my use. That day, the “performance” went pretty well and seemed well-received.

Jerry Kennon helped move the project to be truly finished. Jerry loves to film productions which owes to his former TV studio days. You can talk to him about those details. He approached me in the immediate days following Easter 2013 with an idea to take the project to film. We used the Kennon’s backyard and their beautiful gardens as our set, which meant I had to finish the script. Jerry had to pre-plan shots and not just “wing it.” That worked out well. Jerry did a beautiful job of recording and editing. He posted it to Vimeo online, and I now had a finished script that sat undisturbed on my computer for nine years.

Bringing “The Gardener” Out of the Digital Mothballs for this Easter

I was gratified when Pastor Vradenburgh suggested bringing “The Gardener” out of the digital mothballs for our “sunrise” service this Easter season. The offer was eagerly accepted, as I get very few opportunities to act these days. This former passion is mostly just a memory. Speaking of “memory,” I may be able to remember my acting days, but now lines are a different matter altogether! Re-memorizing lines I had written was almost surreal, as I wasn’t just working on memorizing but also remembering the story as I re-read it. “Hey, I kind of like this!” Maybe dementia can bring a kind of joy of constant rediscovery. While the trials of aging are no laughing matter for some, I’ve met people who seem to have that experience. Jesting aside, I had to memorize this thing, and it wouldn’t be easy.

By God’s grace and with a security blanket seated on the front row (Debi with a script in hand to cue lines if necessary), “The Gardener” re-emerged this April. Never wanting to exactly re-duplicate a production, I decided on period costuming this time around. That was fun, and I hope it blessed you. Many have shared kind and gracious comments.

If you would like to review or see it for the first time, click on the image below. Yes? You know, yes! 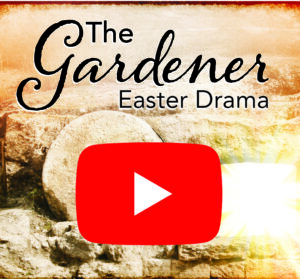